Get Ready to RUMBLE

Spitfire. That's the title of my new series....the series I have been hesitant to create. I'm going to still gloss over what it's about, but along with the hint in the title, I'll give you a few of my recent musical influences. One newish, one oldish (beyond Nick Cave and the Bad Seeds, which is an 'always'...those sick, twisted geniuses).


I have also been listening to this old Prodigy song...a bit more frantic than the other, and I have always enjoyed the visuals on this one. I wanna kick some asses after watching. Also, *yoink* thanks for the title, dudes...


The main point about this series is that it has to be powerful, that the imagery isn't somehow weaker than the message. I don't know that I've ever made 'weak' imagery before, but there's a first time for everything. So without further ado, I'm ready to rumble.

More on this series later, IN THE NEW YEAR!
Have a good one, cheers.


Posted by shana goetsch at 9:41 PM No comments:

Good Times, All Around

I was meaning to get to Maryland Art Place (MAP) last night, but I got so caught up at MICA and all the exhibitions they had opening. Super good stuff, super "Baltimore". I saw Picture Windows: The Painted Screens of Baltimore and Beyond, The Amazing Johnny Eck and Life Interpreted & Home at Last by Colette Veasey-Cullors. Colette invited me to be a guest artist in her Foundations class in 2012 while I was attending MICA for grad school, so it was cool to talk to her and see her work.

In the meantime, last night or this morning before I arrived at MAP, my work sold! That's tremendous, because I really needed to buy some paint and I don't buy new art supplies unless I sell work. As you can imagine, I am a bit more motivated to sell my work than I normally am when I need new art stuff. I went halvsies on the sale...and I feel good about my small donation contributing to their art programming this coming year as well. Good times, all around! 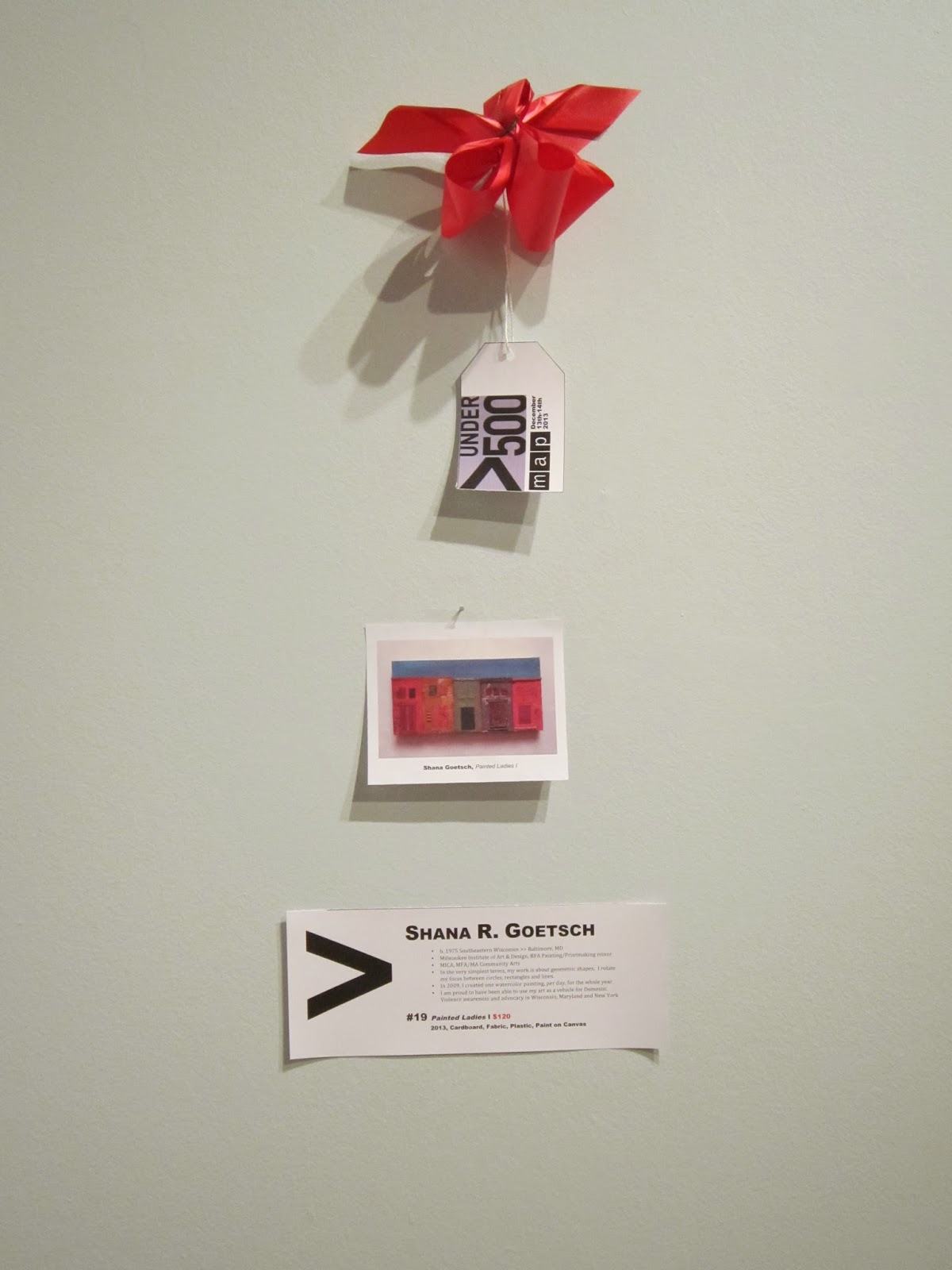 They had these really nice bios under each of the pieces and the red festive bow signified a sale. And even though many of the pieces were gone by the time I arrived, there were little photocopied images in their place, so everyone could see what they were missing. This was a culmination of several 'nice touches' at MAP's Under $500. It was a very nice, full show, I left wanting a few of the pricier pieces, myself. 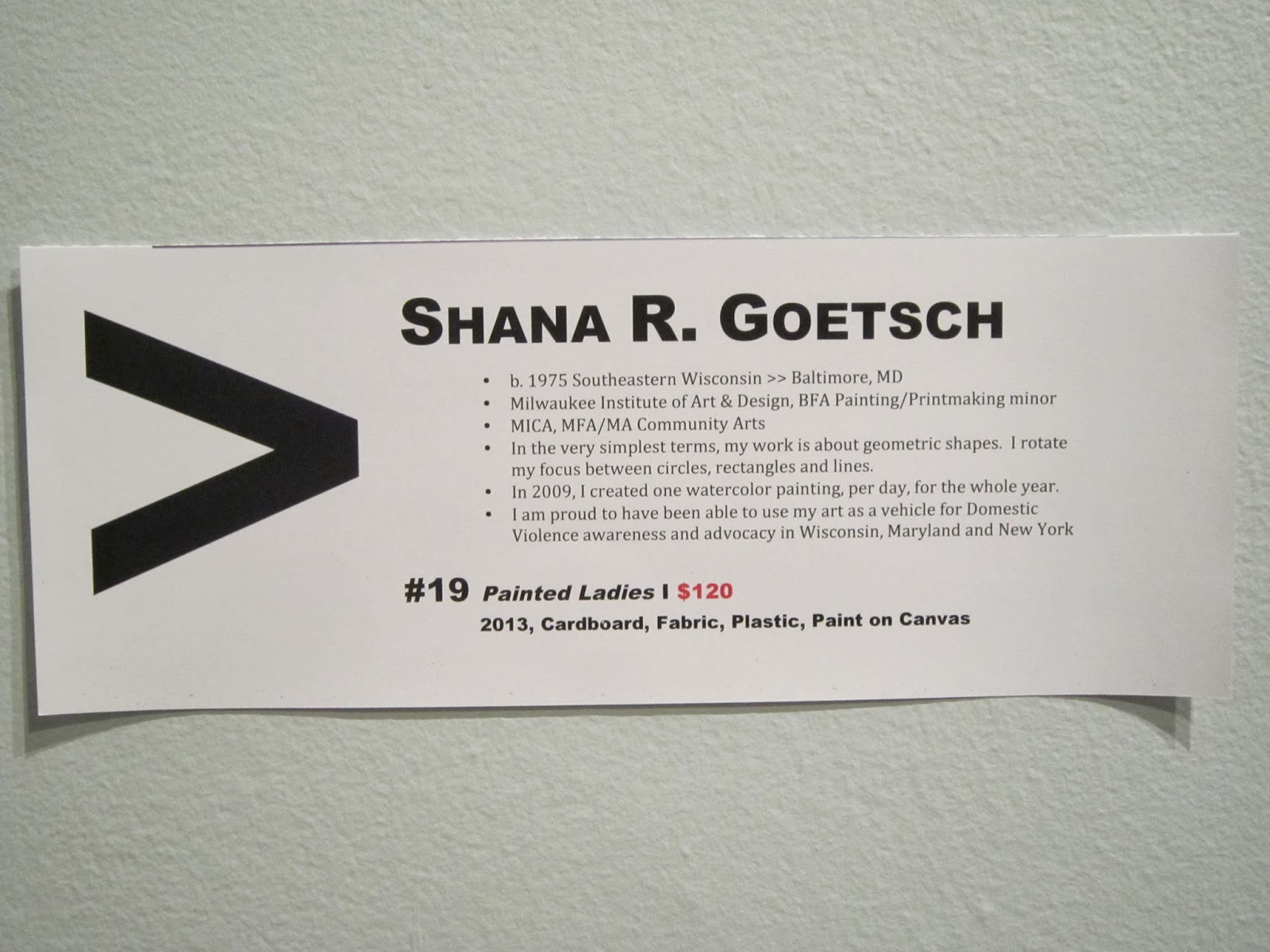 Posted by shana goetsch at 1:56 PM No comments:

Art: Fast and Furious on a Thursday

On Thursday I had a whirlwind of a day. Hard to be in three places at once, but I managed two of them! I managed two exhibitions, 45 minutes apart within two hours....somehow. The first was the Student Art Invitational at HCC in Columbia, Maryland. I had four students in the show this semester and I got photos with three of them! Here is us and their exemplary work! 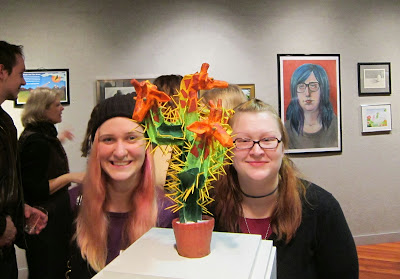 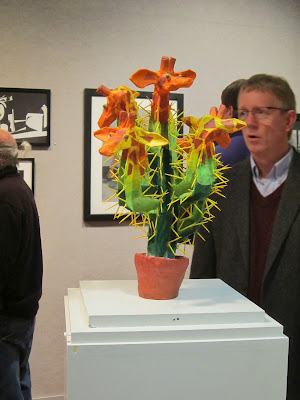 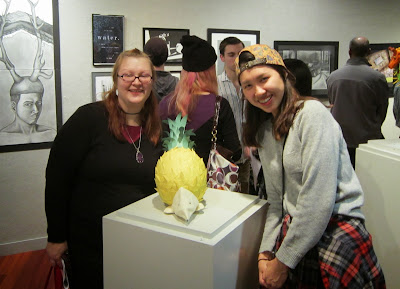 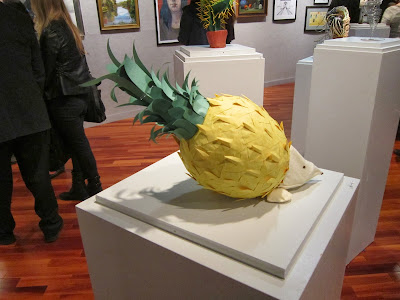 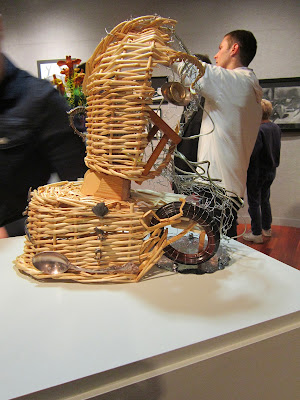 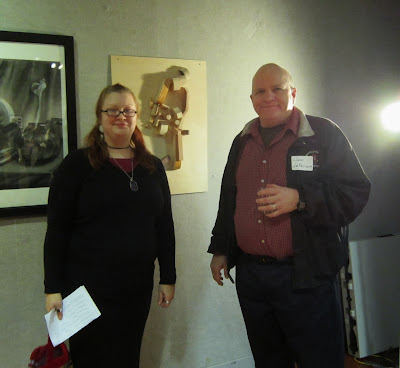 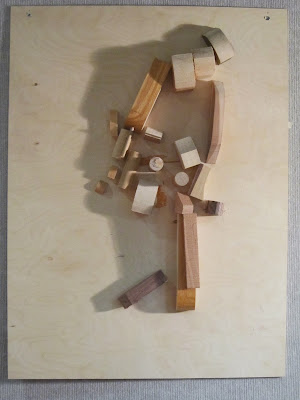 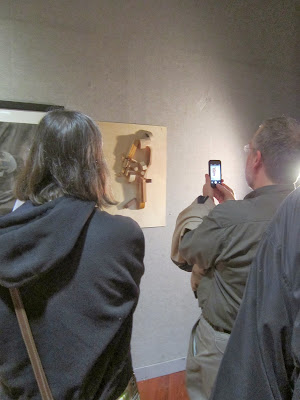 Joel's work had many admirers! Photo of a photo-taker!

AND THEN, if that wasn't exciting enough, I drove back to Baltimore for Jubilee Arts' "Deck The Walls", where I had several pieces in the show, which I donated. When I got there, I realized that my work was right above that of Fletcher Mackey, one of the brilliant Community Arts faculty at MICA. So I got to show my work right above one of my past professors! I have been in exhibitions with my past professors a few times, but I've never been this close. Delightful! Here's the proof... 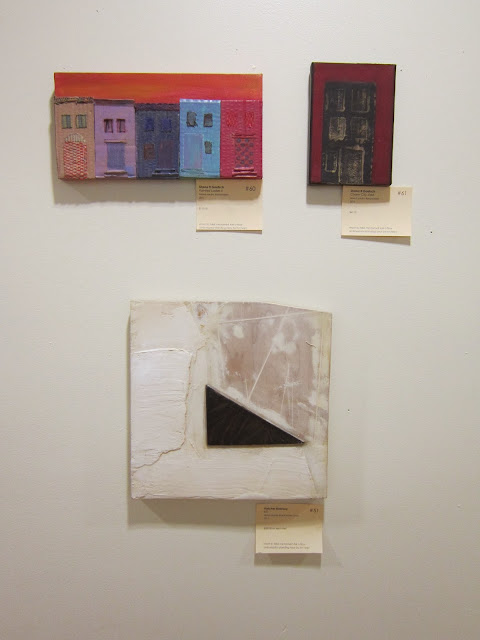 Posted by shana goetsch at 8:00 AM No comments: 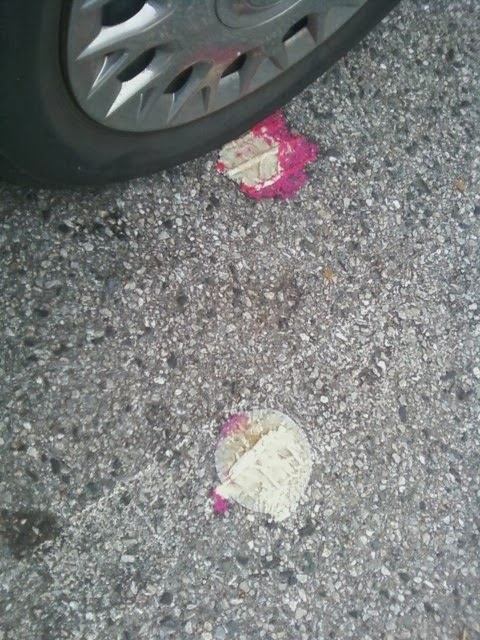 ...a cake made with money, and filled with creamy art-awesomeness. The Baker Artist Awards happen every year for Baltimore's finest and often most interesting artists, and every year we artists can re-activate our profiles and get that shot. True, it is a shot in the dark, but still, one day.

So with that being said, here's my nomination for the 2014 Baker Artist Awards! http://www.bakerartistawards.org/nominations/view/shanagoetsch/

Posted by shana goetsch at 9:37 AM No comments: