Last night I attended Lotta Art for School 33 Art Center at Silo Point in Baltimore. My work has been accepted for the past two years into this lottery-style benefit. Last year my piece was chosen at the last minute. I was excited that I didn't have to go pick it up again, quite frankly. I was delighted it was chosen, but I was in the midst of my final thesis right around the pick up time.

This year I was speaking to a friend and missed the big moment where my piece was chosen (not a stretch, given how many mispronunciations of my name are actually possible), but when I looked up I did, indeed have a red dot. I stuck around and pounced on the patrons when they requested a gallery assistant to remove the piece from the wall. I got 'em right before they left. The above piece, Keepsake, is no longer mine.

If you know anything about me...it's that I follow my life themes. Maybe there are a few more words for this phenomenon, but I cycle back around and around and around. In my undergrad at MIAD, I created a Witness Story for my Service Learning class,  I used the same video I shot, edited it down and it became an integral part of my MFACA thesis. Interesting, how it cycled back around.

I also, have an affinity for the color red. I can't say that I wear a ton of it, by I have a few distinct pieces when I feel I'm in the mood. My apartment, on the other hand, is draped, ensconced, coated in reds. I tend to balance it with a dark turquoise, but it's still that color I go for more often than not. Sometimes I need to stop and think, "Do I need the red?" because of the overabundance of it in my repertoire. I'll actively seek out red.

Speaking of repertoires, I'm not sure if you noticed, but my art work is primarily red as well. It is, and was, so much so, that other people have picked up on it with a very small sampling or, not knowing anything about me at all..."Lotta red". When I was in undergrad, our professor had us write our artist statements based on others' feedback of our work. An intriguing concept that I often forget about, but am remembering now...let others tell you what your work means to them, what they see, not what you want it to be. Wow. Wildcard, what an interesting concept. The feedback I got was sort of sort of...oddy difficult to write towards. They were much the same, one word impressions, "nail on the head"sorts of comments...they were difficult concepts ans words to work into my statement. The truth is always a little bit hard, right?

The least traumatizing word among "forceful" "bleed", "secret" "vaginal" "womanly" etc was "red". Simple. I decided in the end that red was a safe bet, as well as containing and allowing for the breadth of what I needed to say. And again, with the title of this thesis, Sanguine, I selected the word so carefully...sanguine has multiple and seemingly disparate meanings; bloody and cheerfully optimistic. What a weird. damn. word. Well it was perfect for the series. I was really proud of it. It marked the first time I had launched a full scale investigation on violence, my own PTSD, what it mean to be a victim,  an aggressor. I was dealing with domestic violence for the first time, visually. But not calling it that or relating to it as that yet, and not really realizing it was DV at that point. it was a confusing state of being, it was a confusing state of mind that I was in. I was at a point of sheer desperation in my life, I was depressed, sad, feeling so hopeless, missing my mom because I was feeling like an outcast again...and I was angry.

I was always able to cover it well, but I had had a pot of simmering rage for about 20 years at that point. I think I'm still angry, but less so, and more articulate about it now. With my verbal language growing over the years, I feel my visual language has to have changed as well. Nonetheless, I think back and appreciate the care I took in choosing my words. It's probably the best artist statement I've ever written. It actually brings me to tears often, when I happen to re-read it...just the words. Words, single, solitary words sometimes can be so powerful. I'm in awe at the power of language, it's inflection, emphasis, order and chaos.

I looked, and I saw the earth in flames. Her face was nothing but red.

The color red is associated with people's passions, be they joyous or painful. It is the color of the very essence of life, it is our blood. Blood is unique in that it carries two opposite connotations, it can be the giver of life or the harbinger of death. The giver of life has always been a woman, and the earth has always been personified. "She" is essential and ingrained; her experience is elemental, powerful, sanguine. She is not without a face, she is in every face.

Incidentally, I re-used my original notes...my mind map, if you will...of the feedback I received from the other students to write my statement. I recycled it into my next major "bloodbath series", better known as Dear Heart (Deer Hart) - Force. Hmm...you see the trend(s)? 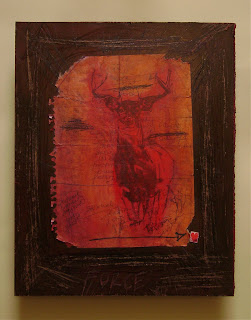 So how then, does the red of horror that I use so often, turn into the red of comfort that I use in my home and in my art (a cathartic process for me)? How do I manage to marry the two? to turn off the association so completely in one arena. People are so comfortable in my home that they often get lulled into abnormal laziness or sleep. "sorry, it just feels so warm and relaxing in here"
I believe my mother actually completed a study about the affects of color on people in prison. i.e. the colors of their jumpsuits. The gist of it was, orange and red and yellow made them angry and on edge. how then, can people be relaxed and angry with the same colors? Red is so confusing and amazing.

***Mom/redcarpet/hollywood/ flashy/ bloodstains, path of blood/pool of blood?/ died on the 'red carpet' in a way

Posted by shana goetsch at 1:01 PM No comments:

For the second year in a row, I've been juried into Lotta Art which benefits School 33 Art Center.
It's coming up at 5:30 pm on April 20th at Silo Point in Baltimore.

To see all of the incredible artwork available ahead of time, check out this link:
http://school33.org/index.cfm?page=events&section=3&subsection=artwork 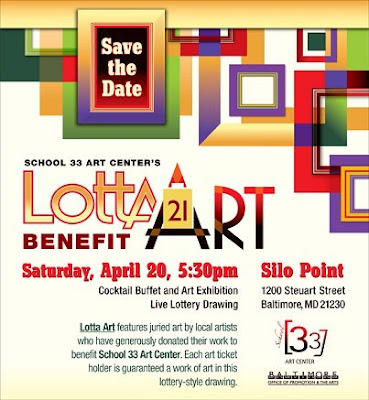 Posted by shana goetsch at 12:18 PM No comments:

'Stories In Form' from BAIC

Just wanted to pass along this press release for Catherine Akin's upcoming thesis exhibition in Baltimore:

Community artist, educator and founder of NAASAP, Ashley Minner (Lumbee) has published an exquisite corpse artist book, “The Exquisite Lumbee”. The publication is featured along with cyanotype photography, poetry and zines created by NAASAP youth participants who will be featured in this years Wide Angle Youth Media Festival at Creative Alliance in May.

The work of young filmmaker and artist, Zachary Greenbaum (Cherokee) will also be featured in the exhibition. Greenbaum has created a film about his father, a Native storyteller Joseph Stands With Many, as he travels to various events. The Tacit Tome is filled with experimental imagery and paradoxical interviews.

This exhibition includes related programming/projects such as our soon to be published community cookbook titled, “Eat ‘Em Up Native American Recipes”. Eriall Steiner (Haliwa-Saponi), a Holistic Health Coach contributed healthy food tips. With assistance from artist Julie Lin and her “Kitchen Stories Project”, the BAIC community created collages based on their most cherished memories of food and family. Limited copies of “Eat ‘Em Up Native American Recipes” will be available for purchase April 26, 2013 during the opening reception.

Since 1968, the Baltimore American Indian Center and its members have kept the Native American Indian culture and traditions alive in Baltimore and the surrounding areas through PowWows, community meetings and health programs. The Center’s Heritage Museum holds an impressive collection of North American Indian artifacts that includes basketry, pottery and textiles that inform visitors of art and craft in Native culture. From soapstone carvings and weaved baskets to documentary film and zines, “Stories In Form from the Baltimore American Indian Center” nods to the past and embraces emerging storytelling forms. For more information on the exhibition and related programs please visit storiesinform.net.

This exhibition is Catherine Akins’ thesis for her MFA in Curatorial Practice at Maryland Institute College of Art, with generous support by the Office of Community Engagement at Maryland Institute College of Art. Akins was born and raised in Arizona and received her BFA in Intermedia Arts at Arizona State University in 2010. Currently, she is part of the planning committee for The John Fonda Gallery at Theatre Project. She continues to investigate her own cultural identity - Mexican, Yaqui, Pennsylvania Dutch - through her artistic and curatorial practice. Contact Catherine at curator@baicmuseum.org.
Posted by shana goetsch at 4:57 PM No comments: