I was recently at the National Museum of Women in the Arts, and lo and behold they had a wonderful, beautiful, Kollwitz piece. Normally I am not this outright 'bad', but I totally snuck my own photo. And it turned out super blurry since I was all panicked, which is exactly what I deserve. HA!

Anyway, along with this piece, I had the privilege of seeing Frida Kahlow's Self-Portrait Dedicated to Leon Trotsky AND the super awesome Bacchus #3 by Elaine Fried de Kooning, which was very gestural, and large, and impressive. The museum had manymany other things I liked too.
Here is said sneaker photo... 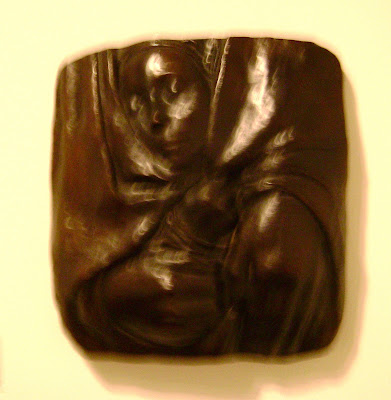 (a very blurry) Rest in the Peace of His Hands, K. Kollwitz


and just for kicks, here's another 'illegal' I managed at the Milwaukee Art Museum last summer during the Gilbert and George exhibit... 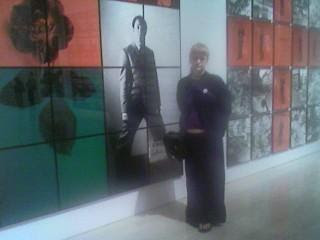 That was my birthday present to myself though. I have to say, turning 33 and having a date with Gilbert and George was excellent. I love museums!
Posted by shana goetsch at 10:06 AM 3 comments:

Two Weeks in the Making

...so y'all get a double dose! Some interesting things for you to gander at in this grouping are: #125, which has double stick tape on it, #127 is a stained piece of wood I found when I was walking down the block, #130 is gold leaf on top of mesh, then I flipped it, and used gesso on the back.

New Photos for the RAA

As usual, I shot these photos of the exhibit.

The artists are Cristian Muñoz and Ximena Soza.

And the RAA blog is here.

A NOTE ON COPYRIGHT For Everyone

When is my work protected?

"Your work is under copyright protection the moment it is created and fixed in a tangible form that it is perceptible either directly or with the aid of a machine or device."

"Copyright, a form of intellectual property law, protects original works of authorship including literary, dramatic, musical, and artistic works, such as poetry, novels, movies, songs, computer software, and architecture. Copyright does not protect facts, ideas, systems, or methods of operation, although it may protect the way these things are expressed."

(emphasis is mine)
You will find this and all other useful information at U.S. Copyright Office http://www.copyright.gov/help/faq/faq-general.html

I have always been fascinated by paintings that referenced a scream. They encapsulate and evoke so much terror, and it's really just an image, just a human expression, just a mouth. What happens along with that normal event is another story; "story" being the leading word here. I love the terrifying narrative of the visual depiction of a scream. And it's not like you are getting the bone chillingness and earsplitting horror that accompanies the noise from a scream. No, in a visual image, we only get the silent action of a scream in progress.

(see example here by Francis Bacon. I saw this painting 'in the flesh', and it was a terrifying visage, indeed).

I think that the narrative behind that idea is way more powerful and full. If one takes away the noise from a scream, it becomes that much more oppressive in nature, that much more helpless and horrible. No one can hear them scream, so what does the screamer do now? I think that what a silent scream says has an even bigger, louder, more wounded voice than one with sound. Interesting concept, no? But if you think about it, it rings true.

It always makes me question what it is, that makes the person so terrified....and then, does it matter, specifically? It doesn't, because I can actually see the terror visually. It's a remarkable thing, coming from a mere human emotion a face, a mouth. Why does the mouth seem to be one of the most powerful indicators of emotion on the face, aside from the eyes....? I think it's the fact that the mouth, in essence, is a very large hole. And holes in bodies, to put it mildly, are generally more vulnerable areas. They are the entrances into someone... the all too human and flawed body, and the soul.

To me, a scream is a scary thing to see on someone's face, with or without the aid of any sound. But I know that silence has its own, unique kind of terror, as well.

Throughout the years, I have done several 'silent scream' paintings/prints already... 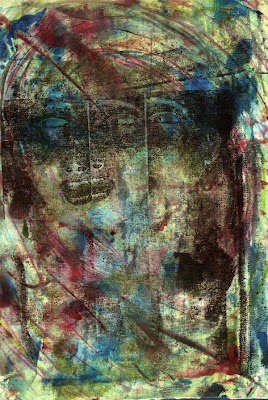 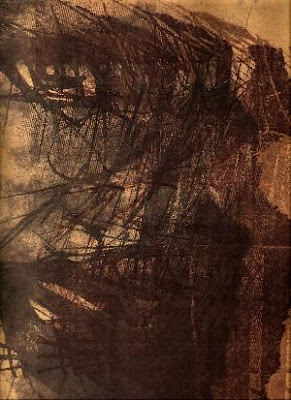 Invisible Unless I Shout 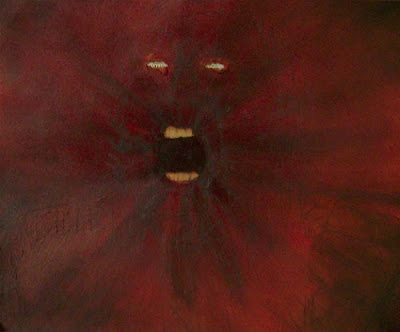 ...and I've been thinking for a few months on how and why I would do more. I'm almost there.

of circles. Weekly, watercolors, plus anything else I decide to throw on them. Such as, there's a big glob of hair (human? animal?) on #117. I think this proves that I'll use anything.

Are you ready for some? Caravaggio. Dramatic paintings, dramatic life, dramatic BBC presentation.*runs out with a flourish*

I had to replace the videos with the link to the first one, here.


Caravaggio is one of my favorite 'old school' painters. Excellent, that I found this!
Simon Schama's 'Power of Art'
Posted by shana goetsch at 12:59 PM 3 comments:

Marlene Dumas
(click on her name...video courtesy of artbabble.org)
And I love the bit about her using dirty brushes. I am so guilty of that one.

also: http://www.moma.org/explore/multimedia/videos/18/203
Posted by shana goetsch at 3:26 PM No comments:

Cheers.
Posted by shana goetsch at 6:11 AM 4 comments:

I Am So Late

I hope to never be this late posting the weekly watercolory circles again. I'm terrible!

Now, I really like this set, starting with the first one, 365.ninety-nine. And on that note, we crossed the 'one-hundred' mark in this round as well.

Okay, so the first one in this group has some odd liquids dripped on it. This has a special blend of radichio and butter(!) plus watercolors. Yeeeah, the radichio had a pretty-colored juice when I cooked it, and I also knew the grease would resist. It's a bit of crusty fun, it is. 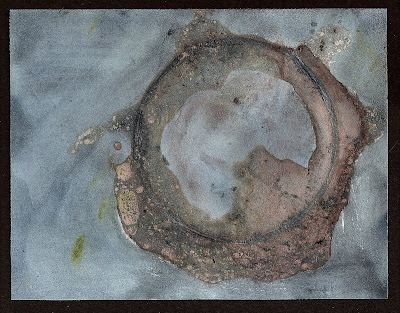 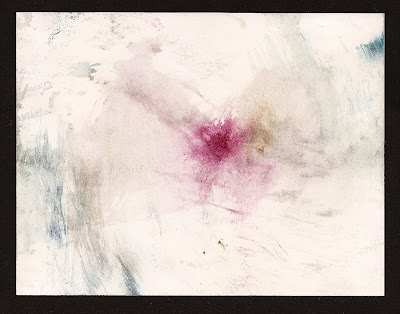