All Up In It

This is what I've been up to lately...

I scored two jobs this summer, one college class, teaching Three Dimensional Art and Design again, and one with the Baltimore City Public Schools again (I was employed with the same program last summer). The gig with the kids is pretty sweet because it involves STEM-related arts programming, or as I like to refer to it, 'STEAM'. They are taking a trip to Mars (in their imaginations)! So for the next five weeks we will be preparing for our journey and creating a lot of models, maps and product prototypes. We will, as well, be growing a few things...you know because of terraforming. I am having a lot of fun making the exemplars for them and kind of wish I was getting ready to go to Mars too...I'm seriously ready, in theory.

I have work in Creative Alliance's upcoming exhibition, The Big Show, an annual tradition for members (or like myself, employees). I'm still testing out the waters of Baltimore in terms of what sells and what doesn't. If it's attached to a good cause, like an auction or something, my work sells. No problem. Now to translate that to me, personally. I chose to submit a colorful row house piece because I noticed last year that the works which sold were Baltimore-related or themed. We shall see.

I also had an art sale / birthday party in June. I broke even...mainly because I wanted mimosas...it was my birthday! But I've learned a lot for next time. I also recently bought a large, round table for any workshops and classes I might want to host in the future. I got it for cheap, but it's a great, heavy brute of a table, so I'll most likely be lugging that thing around for the rest of my life.

If you'll remember, last month I was in an alumni exhibition at MICA (you can refer to the last few posts for the skinny on that)...well, that show was recently featured on Bmore Art and I even got a name and image drop out of it: http://www.bmoreart.com/2013/06/wst-ssy-art-community-at-micas-decker-gallery-by-cara-ober.html

I neglected to mention on here, that I have kittens, as well! They are nearly 2 months old by now (currently doing their midnight run, "The Household 500"). The stray cat I intended to save from getting pregnant, was in fact, already pregnant. So close. So she at least had them once she was inside. I was lucky enough to get the whole birthing process on camera. Well, I missed seeing the first one, but only because it was 3:30am when she delivered him. I woke up to the sound of a baby crying and grabbed the camera as I was getting up. She had four fluffy buns in the corner of my bedroom, approximately two feet from the edge of my bed. I was privileged to witness it. And I'll say it here too...birth smells like a musky sunshine; really clean and elemental. 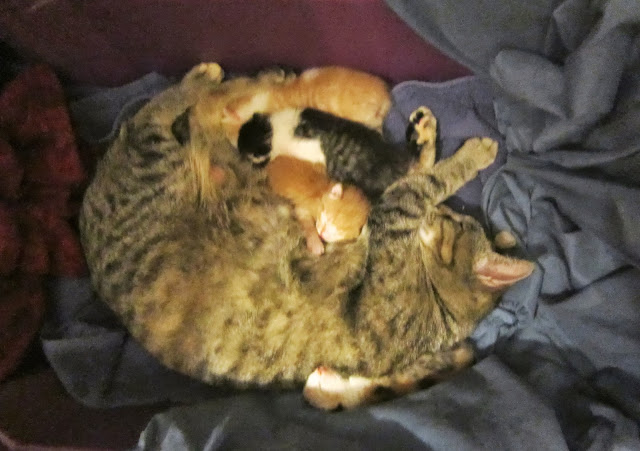 I'm telling you, this summer could not get any more optimistic. All signs are a go! Mercury (currently in retrograde) can just stuff it, for I have kittens.

Posted by shana goetsch at 10:07 PM No comments:

Found out at the exhibition reception that both of the pieces I submitted to the ACCR/MICA Art + Community exhibition and project have been claimed! These pieces will be going to two separate agencies in the area! 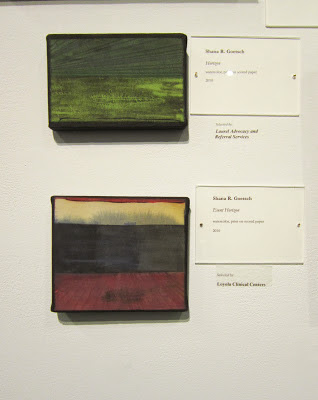 The piece on the top, Horizon, will be at Laurel Advocacy and Referral Services, Inc. "LARS is a non-proselytizing ecumenical ministry serving the Greater Laurel area by assisting homeless and low-income individuals and families who are experiencing crisis, providing both emergency and long-term services designed to promote self-sufficiency."

The bottom piece, Event Horizon will be at Loyola Clinical Centers. "Loyola Clinic Centers is a community based organization operating under the auspices of Loyola University Maryland, providing comprehensive education and training of graduate students in collaboration with academic departments across a variety of disciplines. The Clinical Centers are committed to the idea of social change in service to the community, the city, the nation, and the world, and dedicated to research and scholarship of issues that most affect the ability of people to develop, change, and lead meaningful lives." 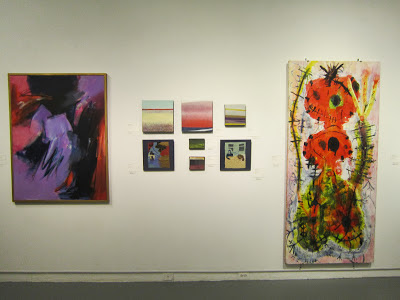 Saw President, Fred Lazarus at the show, since it was all alumni...that's about the only person I knew, unfortunately. But it was a really great exhibition, full of some really great abstract pieces. I was happy to be included among the alumni represented and body of work shown. Thanks to The Art Connection in the Capital Region for organizing this great project!

Posted by shana goetsch at 7:39 AM No comments: 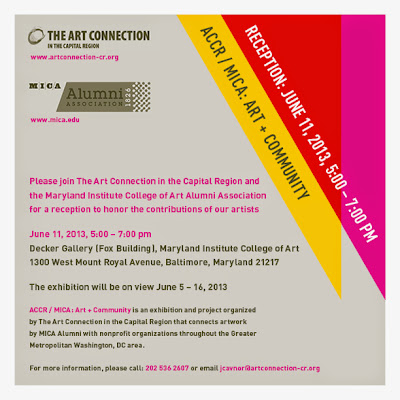 I'm very excited that two of my watercolor and print pieces have been accepted into this project/exhibition! Opens June 11th, 5-7 pm in MICA's Decker Gallery. See you there!

Posted by shana goetsch at 3:38 PM No comments: