Thanks, as always, to The Vagina Warrior for the heads-up.
Posted by shana goetsch at 7:10 AM No comments:

Check It Out: Me on social he(art) blog

This is a really good resource for anyone and everyone. I suggest you take a gander at all of the links afforded to you on the site. While you are there, you can check out my personal story and how it relates to much of my artistic work: the issue of domestic violence, and a wee bit of art therapy thrown in on the side. I am lucky enough to currently be the featured 'story' on this excellent site. Please check it all out, it's a wonderful venue for artists, as well as the socially-conscious.

to a woman, whom I remember explicitly from my youth, as being the epitome of strong, smart, and resourceful (not unlike a few of the earlier roles she played). Ms. Farrah Fawcett and her characters taught me very early on that 'fighting back' was possible, nay necessary...even when one was incredibly broken-down, humiliated, or possibly even half-dead. Let me just term it now as "the quality of womanly tenacity that I strive for", and leave it at that.

Here's a link to an enlightening and honest interview she did for the movie 'Extremities'.

So I'd like to finally say...Ms. Fawcett, after a very good fight, may you rest in peace.
Posted by shana goetsch at 10:12 PM No comments:

Alrighty, Here's the second half, finally...

p.s. #161 is a photo that replaces the original painting which is completely gone/lost. terrible!
Posted by shana goetsch at 9:20 PM 5 comments:

The Completed Circle, Part I

The second half of this double-decker is coming up soon...

I'm in this show, check it out! 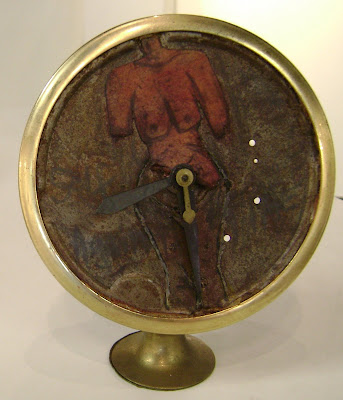 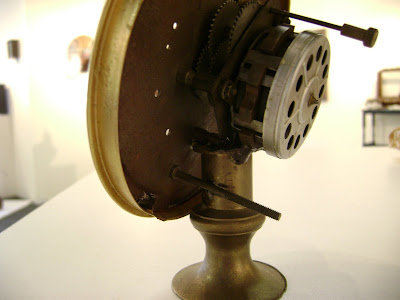 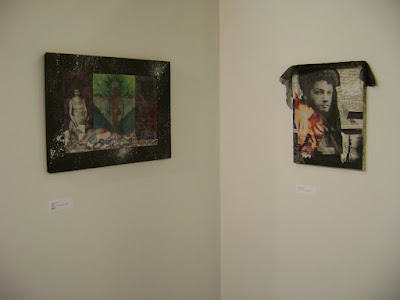 Requiem and Fire and Noise

The exhibit is up through July 11, 2009. The Jazz Gallery is located at 926 E Center in Riverwest, Milwaukee.

(p.s. I know, I KNOW, I am super late on posting the circles again. I ran out of polyurethane though...so you'll get a two-weeker again, this Thursday. ) 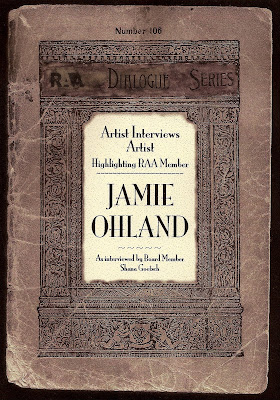 Hey! Check out my interview with Jamie Lee Ohland, RAA member. You can find the interview and examples of her work here.

Posted by shana goetsch at 6:49 PM No comments:

My submission/birthday card for the Wisconsin Arts Board's 35th Anniversary. I had so much fun.
So, what's the deal with me and 'art'? Find the answer here... 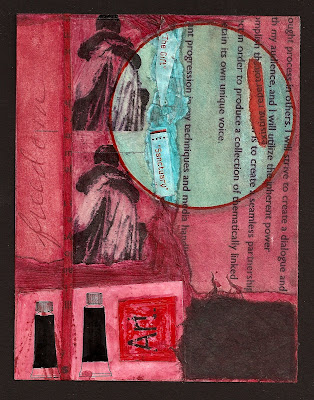 That's what this week's studies have turned out to be primarily made of: aqua and orange colors. Love me some aqua. I quite enjoy the first three...

It's about that time again...'psychological time'. I'm feeling as if it's almost time for my annual self-portrait. Last year's (not pictured) was a bit bloody. I think I'll not do that again, at least try not to. I've actually been itching to use this found object (piece of circuitry) that I found on the ground a few years back, but I couldn't quite get it together for last year's piece.

For some reason, my self-portraits are always super intense (and this isn't nearly the whole collection, I've got a huge bedroom wall full of them, and not all are hung up either. I should count them all one day, I'd be interested to know just how many I've done. hmm.)... 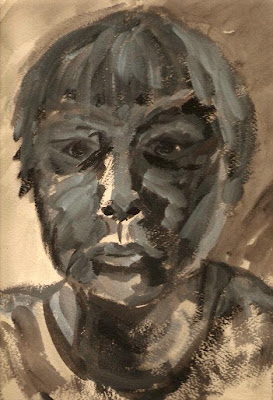 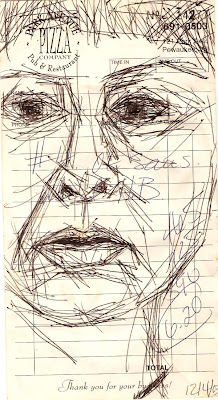 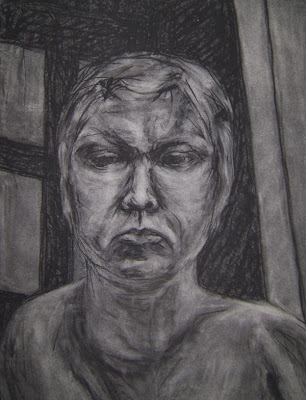 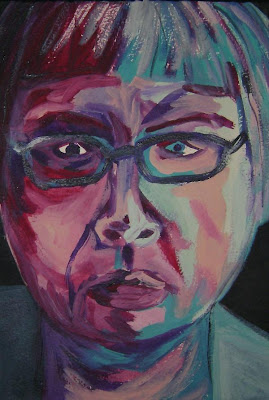 These are two, of the three pieces I will have in the (re)cycle (re)visit show. These are both quite old, as well (at least 4 years on each). But I really wanted to give them a chance to 'shine' before it was far too late, it almost is. The third piece that is in the show, was revamped right beforehand, so I have no current photo...yet...I will be able to take advantage of the excellent lighting at The Jazz Gallery. 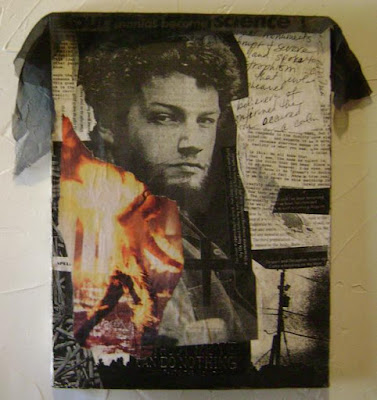 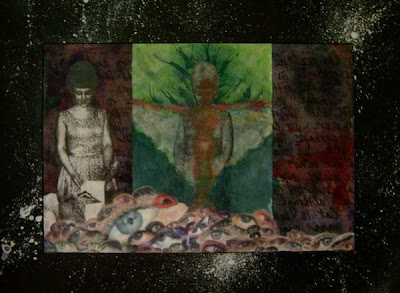 Check it out Milwaukee (and neighboring communities)! 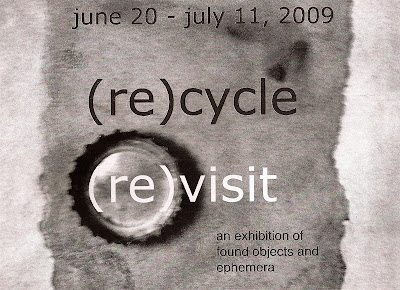 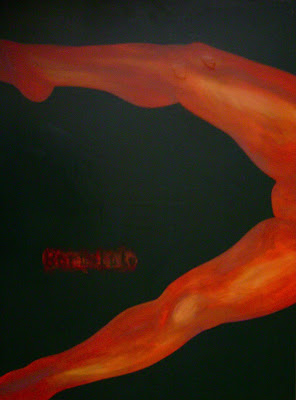 Born Into and Resurrection Scream, 2005

These are both very large and hang on my spare room wall, right next to each other. It was one of those things...I made them for the sake of painting, purely. And so they are painted on the worst materials ever, scraps of already used plastic. I believe that one was a collagraph printmaking plate at some point. I love the way these turned out. I wish I would have made them on sturdier materials, back in the day. Born Into is unable to even hang of its own volition, poor lil thing.

I used acrylic paints on both, and I don't know that the photos quite capture the color-hostility inherent in these pieces, especially the legs. These are such angry, violent paintings, truthfully. But the concept is: Born Into is about being born into this world socially (a scary, hostile society), as well as being about the idea of actual human birth. I don't care what anyone else says, I think birth is a violent process, we come out screaming and red. And I'm tellin ya, if we could remember it all we would be totally traumatized...forever.

Resurrection Scream is about seeing death, seeing a living thing 'cross over' to that other side; that is, the other side of birth. And death too, can be quite violent for some. I felt it was an interesting dichotomy, as they are like bookends to themselves/life.

An interesting tidbit here, is that the words found on the legs piece are actually part of a grave-rubbing that was done on the piece underneath (yeah, I painted over something else, almost entirely). It's a part of the phrase, "born into the spirit world..." that I allowed to show through the plastic, the words almost float through that space now.

Here are some larger versions to look at... 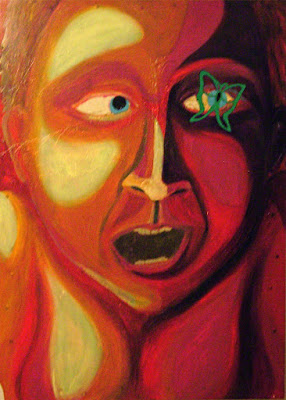 I enjoyed quite a few of these, this week...

I'm not going to post most of the photos I have of my latest trip to the cemetery, because I'm about to get artsy with them (just you wait). However, I have a few cool photos I'd like to share right now...keep in mind that I have always loved cemeteries, it's tradition in my family.

I believe this is Michael, the Arch Angel sans pointy weapon. 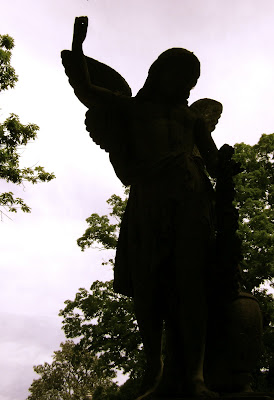 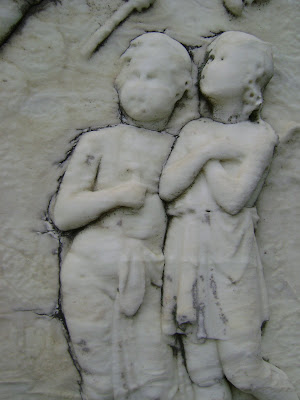 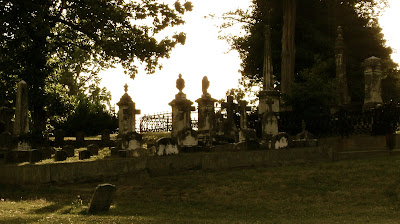