You could have waited for me,

So I'm going to all the places I thought you would

Posted by shana goetsch at 9:54 PM

What happened in the past year:

1) My dad died on this date last year and I planned the whole funeral by myself in like, three days, while also teaching several courses online.

2) The next month: a mentor died suddenly

3) The next month: got dropped/ghosted by the dude I was seeing (for the first, not only time)

4) The next month: my cat, Tommy Scrapples died and I had to watch him suffer for a month beforehand

5) Got taken to zoom court and cross examined by my murderer brother over my dad's estate. Verbally fought back because apparently, people still don't understand their own laws on victimhood and domestic violence in Wisconsin....but okay

6) My brother then sent insane letters for several months to the court until the appeal was settled (they are now of record) --on my being an imposter who murdered the real Shana. (Shanna with two n's!)

1) I got a treadmill and have managed to walk almost every day, my hip hurts wayway less now, and I am more flexible, again

3) I just started walking in the woods around Baltimore, because I realized how much I missed it when I went home to Wisconsin. Serenity Now. #calltoadventure

4) I am able to start traveling this summer!!!

5) I paid off all of my dad's debt today, on the first anniversary of his death. I was truly so panicked about running his estate, but I did really well!  All that's left is to sell the house...

7) I finally have a few ideas for new art series' AND a new studio!

8) One of these ideas may or may not be dramatic readings of my brother's insane letters to the court, of which I have copies ;)

10) I now have a tenant on my first floor, in Druscilla's studios, right next to mine. I have a few more things to paint, and then will be renting the other studio, across the hall in a bit...

Y'all. Shoot. This has been a MONUMENTAL YEAR for me, in terms of emotions and psyche. But I came out unscathed, and I think, ON TOP. 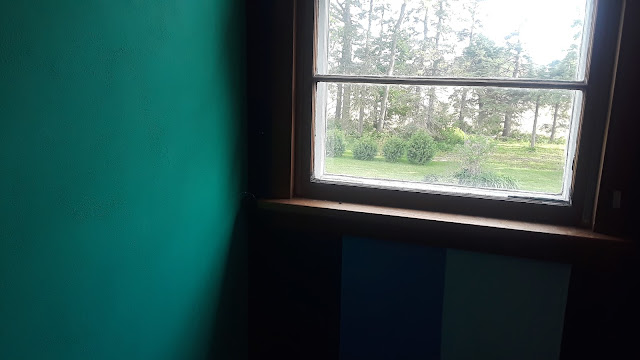 Posted by shana goetsch at 6:43 PM No comments: 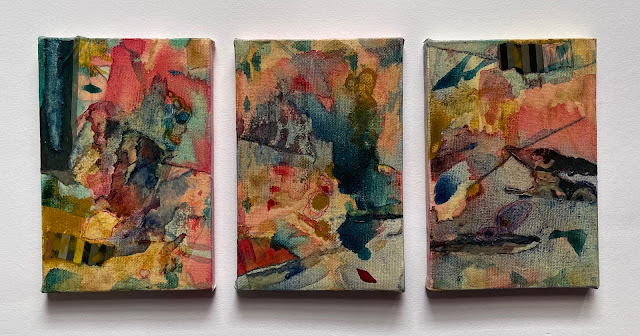 Posted by shana goetsch at 10:39 PM No comments:

Pick Up Days Are Sad

There are only brief moments in time where my art is actually SEEN, and so when a show ends, I always have a bit of sadness. But at least they got some extra time to shine!

Here are some images from (the opening of) the show that just closed, "How We Are Healing"... 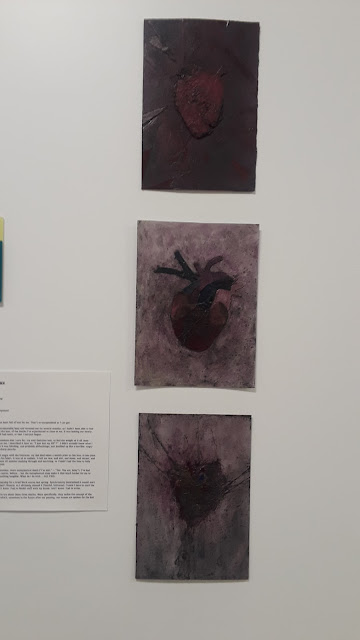 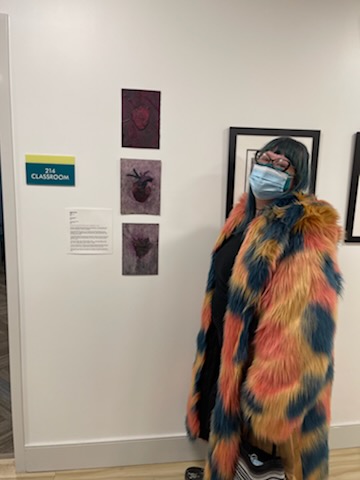 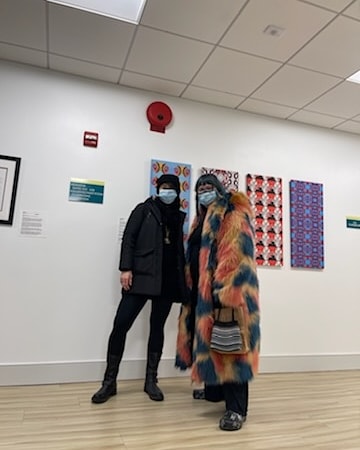 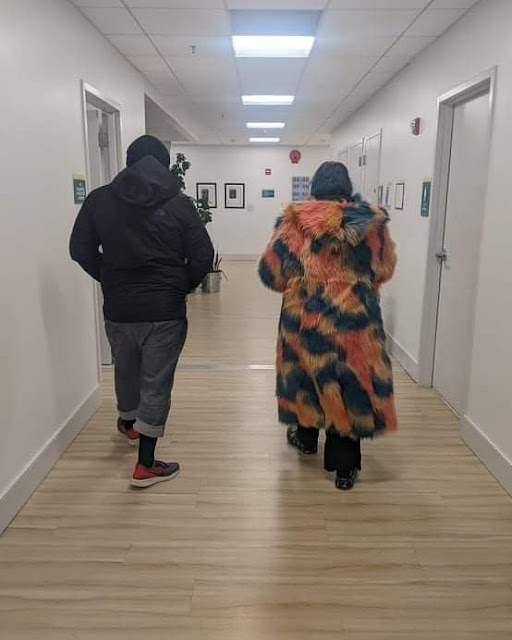 Posted by shana goetsch at 10:55 PM No comments:

It has been saved by me -- in pristine condition -- for all these years. Such a good mom. I don't believe I was so disappointed at the time, but she sure was, on my behalf.

This kind of love is still a mystery to me (a mother's love), or maybe all of it is... not necessarily the emotions, but the definition, the types, how to express each of them, and how to see them each in others. We should have more words for "love", because it really encompasses so many ways of being, and so many gestures, and so many different 'feels'. One word in a language is not nearly enough to express it all adequately. 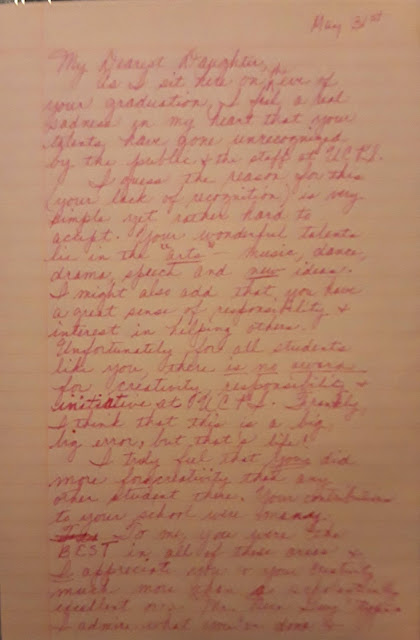 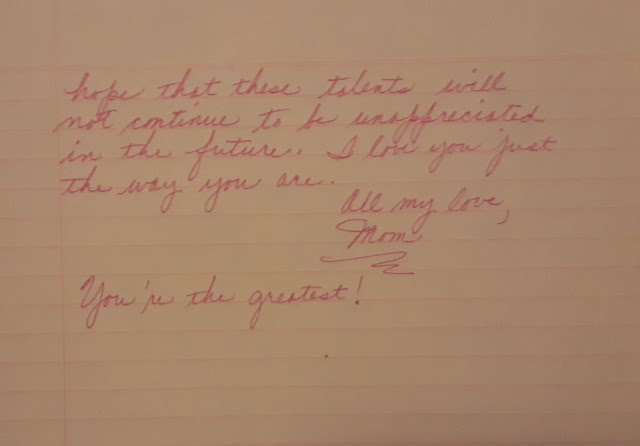 her letter is written as follows:
My Dearest Daughter,
As I sit here on the eve of your graduation, I feel a real sadness in my heart that your talents have gone unrecognized by the public & staff at UCPS. I guess the reason for this (your lack of recognition) is very simple yet rather hard to accept. Your wonderful talents lie in the "arts" --music, dance, drama, speech and NEW ideas. I might also add that you have a great sense of responsibility & interest in helping others. Unfortunately for all students like you, there IS NO AWARD for creativity, responsibility & initiative at UCPS. Frankly, I think that this is a big, big error, but that's life! I truly feel that YOU did more for creativity than other students there. Your contributions to your school were many. To me, you were the BEST in all of these areas & I appreciate you and your creativity much more than a scholastically excellent or a 'Mr. Nice Guy' type. I admire what you've done & hope that these talents will not continue to be unappreciated in the future. I love you just the way you are.
All my love,
Mom
You're the greatest!
this is a corresponding piece I created using copies of the letter, from 2010 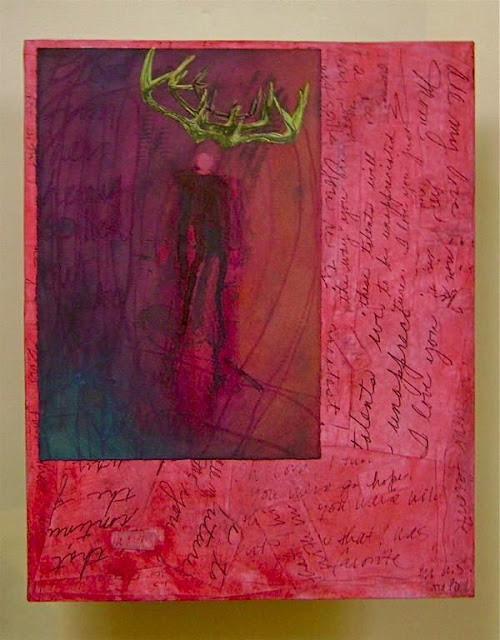 Deer Hart (Dear Heart) - Warm
On a darker note, this piece also contains the Neko Case lyric: "Blood from her heart spilled out onto my dress and was warm."
Elemental. Bloody. Love.
Posted by shana goetsch at 8:13 AM

Slouching Into a New Year...

I thought I would drop some work I finished in the past month. A few diptychs belonging to the Doom Days series... 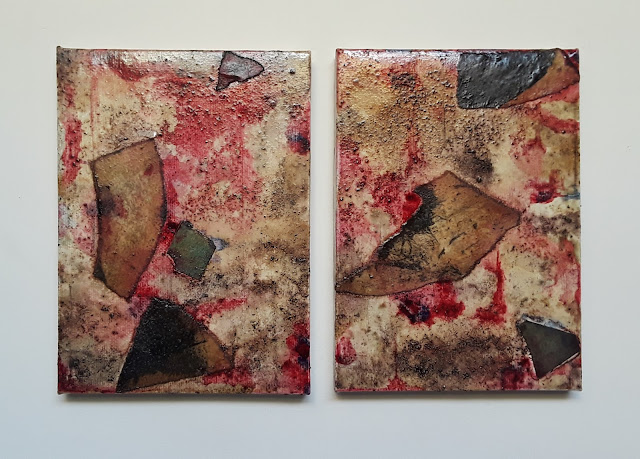 And here, I have an "evolution of" series of shots, culminating in the final diptych... 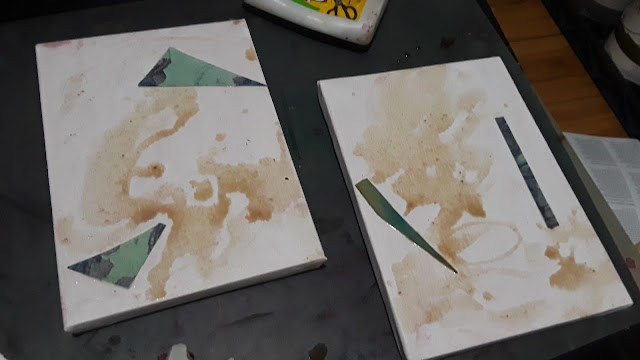 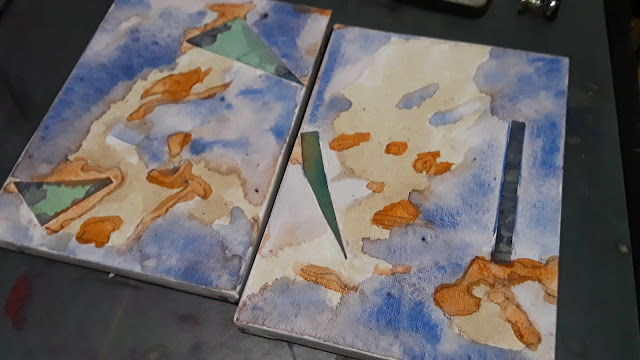 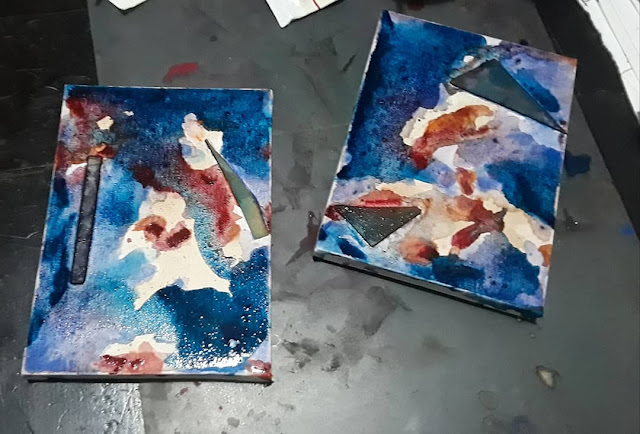 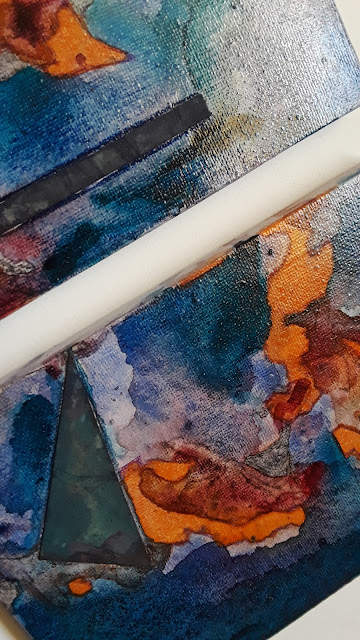 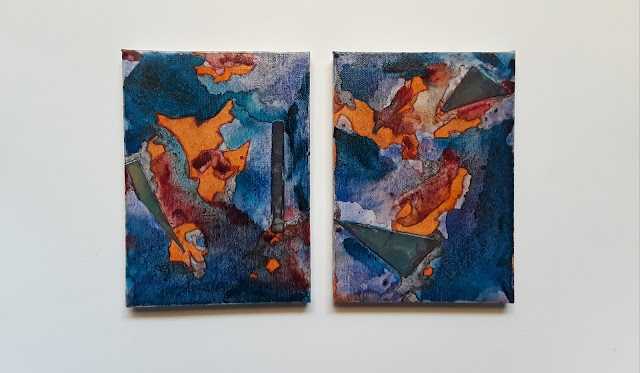 I finished this series, Already Not Here, sometime last week.

I envision this as being presented in a grid formation, but I will have to explore it once the first three pieces are back to me from the exhibition, in late February.

This piece uses salt in the background, "to blind the devil"...and it refers to the layers of trauma experienced. 3 layers, for the 3 lines found in a haiku. 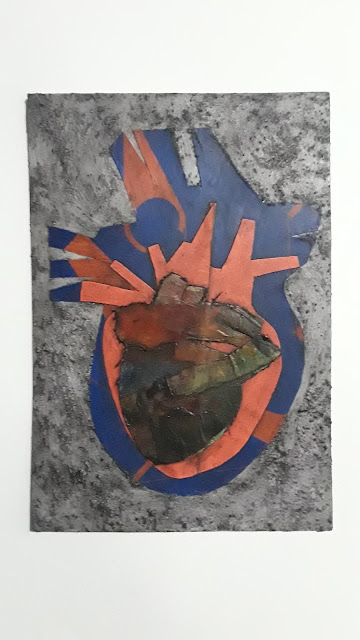 Haiku of Trauma
This title of this piece comes from a line in an Indigo Girls song, "Keeper of My Heart". I wanted this to feel scabbed, and dug-into, and layered with ink. All of the works in this series have a top layer of ink embedded into the surface, much like one would find in preparing an intaglio plate for printing. 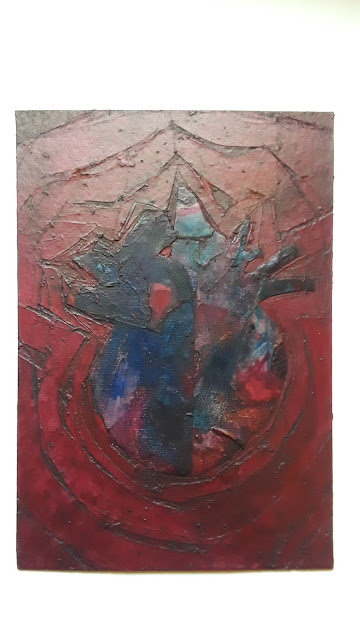 For You, I Would Tattoo Me
The piece below utilizes a human figure and only half of a heart shape. This is also about the frames within frames, seen both visually, and then psychologically. It deals with issues of identity, which --as someone with PTSD-- has always been a bit murky and/or a bit dicey. Salt is used again, around the edges for a type of protection/purification. 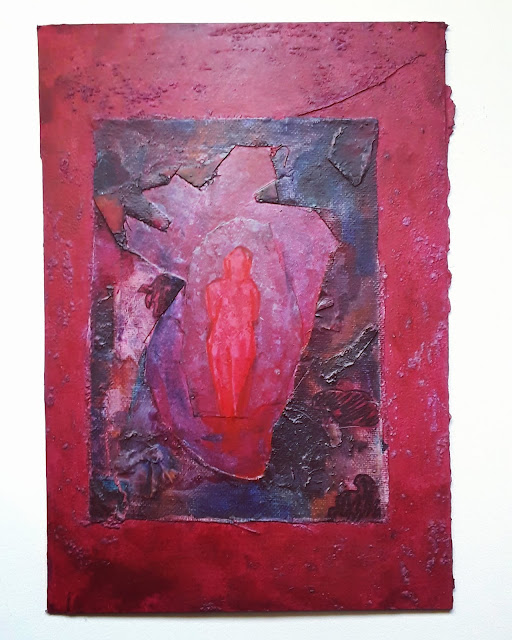 Exi(s)ted
This piece is about a certain person, from a certain spacetime.
Formally, there is a sense of repetition within quite a few of these later pieces... 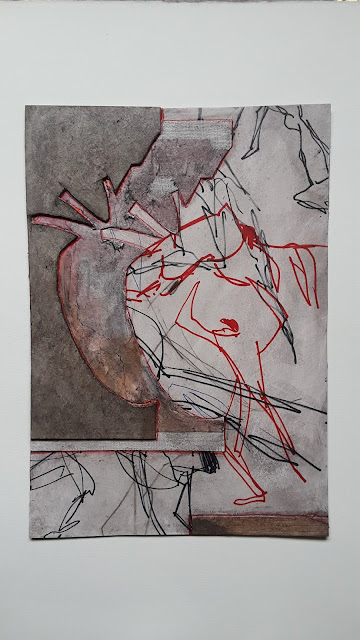 Hollow Words & Hashtag Platitudes
Much of the same here, but the title directly refers to the King of Hearts card, sometimes known as the "Suicide King". 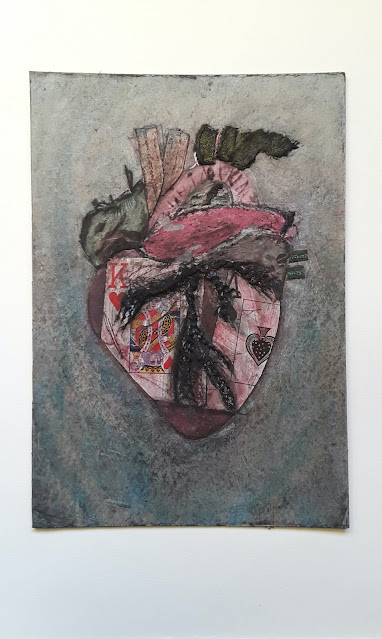 Posted by shana goetsch at 1:56 PM

A recording of the Guided Pathways event at HCC, where I speak about my art in the Doom Days series, and the words....always the words, is below (about 50 minutes). 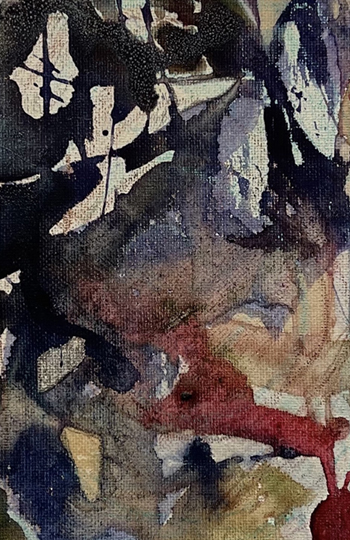 You can still view this online exhibition here: https://horowitzartonline.cargo.site/Shana-R-Goetsch-Doom-Days

Posted by shana goetsch at 8:24 PM

Last week I was so pleased to speak about my series, Doom Days, with students and faculty at Howard Community College! I was asked to speak to both the paintings, and the artist statement/poem. 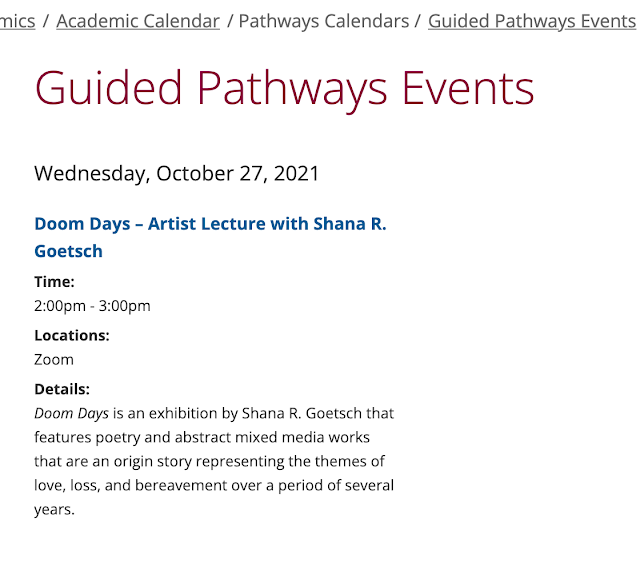 Also last week, I received word that three of my pieces from my new series, Already Not Here, have been accepted into the exhibition, How We Are Healing, an exhibition produced by curator, Sarah B. McCann, and in partnership with The Keswick Wise & Well Center's The Art of Healing Symposium. 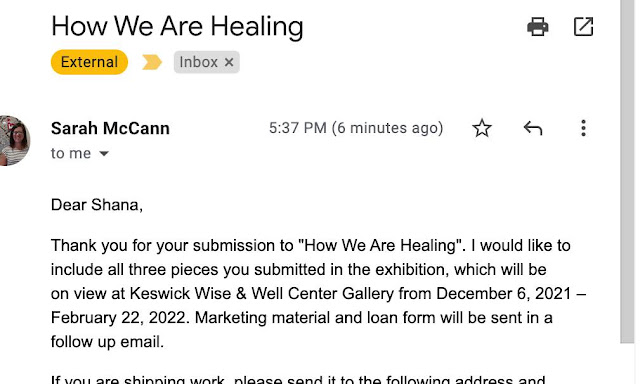 I'm looking forward to being a part of real, in-person exhibitions once again! But I'm not looking forward to figuring out how these printmaking plates will hang and be presented. I'm always setting myself up for a challenge, in that respect.
Onward.
Posted by shana goetsch at 9:11 PM

This was my first ever published art piece. It's an advertisement from my dad's political campaign, way back in the day... 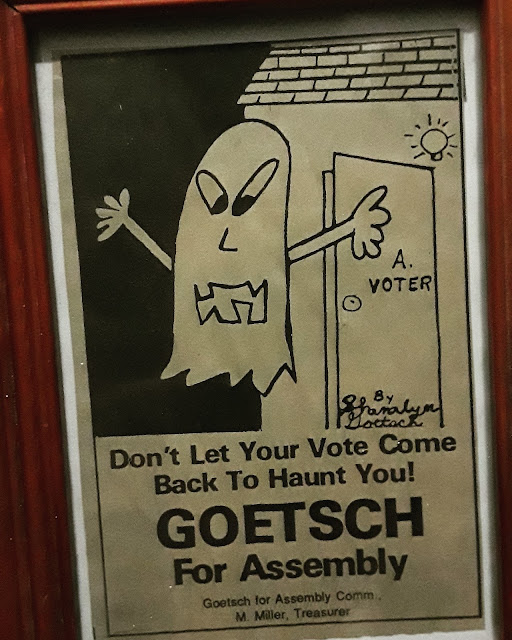 While still timely advice, I bring this up because my dad will be honored tomorrow at the Wisconsin State Capitol! His sister and a few of my cousins will be there in my stead to witness this honor in person. I am very pleased that he will officially be remembered for his many years of community service. It's now on record.

"Rep. Born, State Representative of the 39th Assembly District, has authored an Assembly resolution to recognize and honor your father, commemorate his life and commitment to public service."

side note: I was trying out artist names so it's signed as "Shanalyn"

Posted by shana goetsch at 9:22 PM

I'm apparently not me...

...so on this particular day, I was my own goddamn sketch artist. 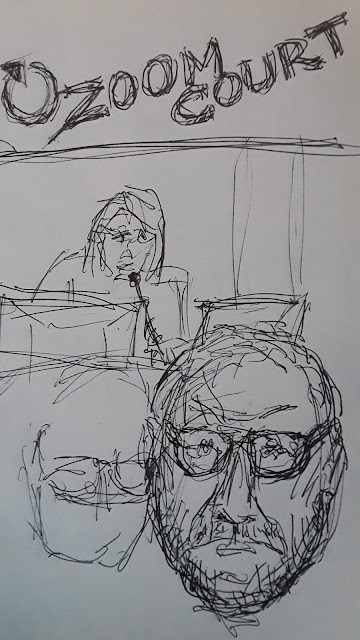 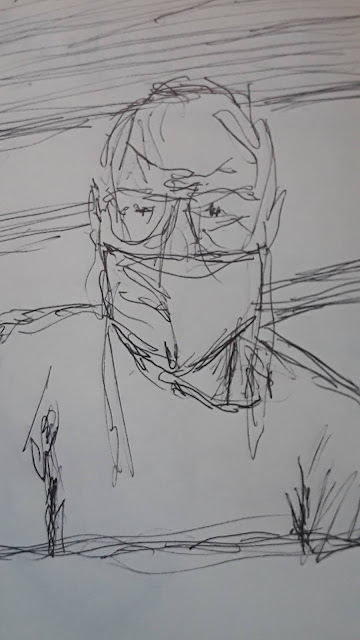 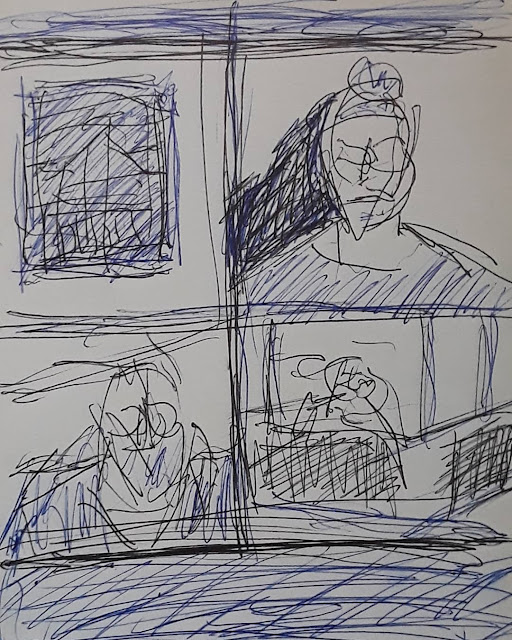 Posted by shana goetsch at 2:30 PM

The loss of my handsome orangey boy, Tommy Scrapples, has been immense. I can feel the lack, the open space where there shouldn't be, the absence of his large presence...it's much too quiet in here. It's much too loud in some ways too; the quiet being almost deafening. This death was sudden, and fairly traumatizing to witness, let alone (I'm sure) endure. It's maybe, finally, really broken me. I might be dissociating. The circumstances truly did him wrong; it was total and complete bullshit. It was not right. He was robbed, and so was I.

Twice, I made this piece, because the first time... it was not right.

It's enough, for now, but it feels like not enough.

All Hail The Traveler.

Posted by shana goetsch at 8:49 PM

In the meantime...my cat died suddenly...and I may have decided that the title (above) is the new series title, since I just keep racking up more losses....or at least more than the three. I finished this piece yesterday. It's a collograph plate (technically), inked and wiped.

...the concept of the “third death” in which, sometime in the future after our passing, our names are spoken for the last time... 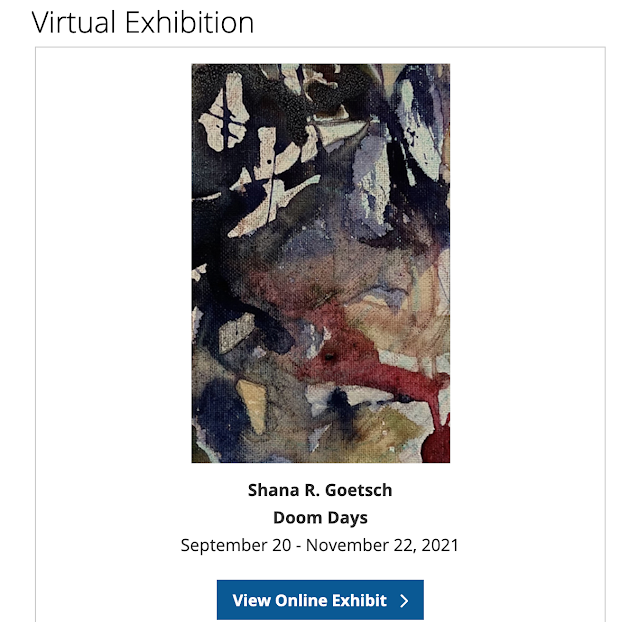 Posted by shana goetsch at 7:51 AM